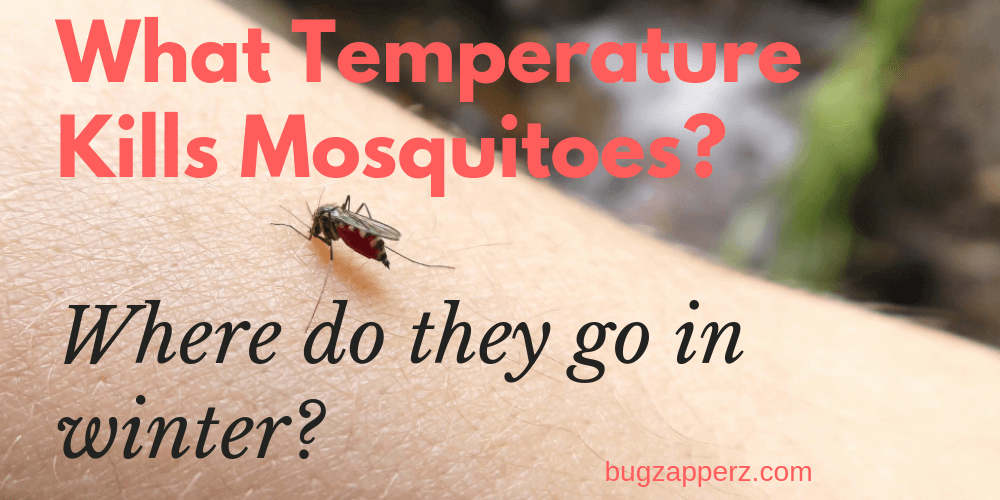 Everyone loves a dead mosquito. The disease-spreading pesky insects are best after an open hand splat. We can keep them away with sprays and torches, but mother nature kills them off, too.

Though they populate with ease in water, they are not always impervious to cold weather. That’s the good news. The bad news is that some of them have a type of natural “anti-freeze” in their system.

And, some stay cozy and warm under inches of snow. So, you may be asking what temperature kills mosquitoes. And, how do some of them survive the winter?

Here’s everything you need to know about how some skeeters batten down the hatches in winter.

The mosquitos we most want to die are the females. Males don’t bite or lay eggs.

Of the 4000 strains of the insects, most start shutting down at temperatures of 50 degrees and lower. Some females don’t go down without leaving their offspring, though.

They can lay their eggs in water (even if it’s frozen) before perishing. A mass kill of mosquitos would take several days of sub-zero temperatures.

If you are considering moving to where no mosquito can survive, Iceland awaits.

Where Do Mosquitoes Go During the Winter?

Though low temperatures can kill the insects, what keeps them warm may surprise you.

The skeeters who prefer to wait it out for warm weather, there’s a variety of cover they can use. Like their disgusting cousin, the tick, they can burrow under leaf litter and snow to stay warm.

They can move to interiors such as outbuildings or attics, too. Most of us would not notice them as they may not be active in searching for food (your blood) during this time.

The females that mean to hibernate are hearty, and consume nectar in winter to “fatten up”. These survivors live for several months.

Most other blood bandits live less than seven weeks.

Why Don’t All Mosquitoes Freeze?

Most male mosquitos will die in freezing weather. But, females have the equipment to keep going.

As we fill our cars with anti-freeze, mosquitos generate glycerol. This will replace some of the water in their system. Glycerol also reduces ice forming within their cells, so damage cannot occur.

The biochemical also lowers the temperature at which fluids will freeze. This allows survival at much lower temperatures. It would take several days of sub-zero temperatures to kill most of them.

Whether the female vampires live or die in winter, they’ll lay their last batch of eggs when the cold comes.

Those hundreds of eggs enter a state of “diapause”. This state suspends growth until warm temperatures return. They need only 1/4 inch of water and a little time to hatch.

They’ll live about ten days in the water then begin their lifecycle. Experts tell us they don’t go far. Mosquitos cannot fly long distances or very high and stay within a few hundred feet from where they hatch.

Are There Mosquitoes That Bite in Winter?

For those who live in moderate weather, the irritating nippers can strike from the inside.

Humans who live in the Southern US find mosquitos in their house most often during the winter months. Outdoor temperatures have a fuller range, and insects prefer indoors where it’s evener.

Though they may not be as active, they have to eat sometime. Doctors report West Nile Virus cases as late as the middle of December in pockets of the balmy south.

Mosquitos date back to the Jurassic period, and there’s no end in sight. Like cockroaches, they may survive past any human intervention.

It’s not only annoying and itchy but deadly, too. Saliva from a mosquito bite can have dangerous contents. The Zika Virus, West Nile virus and canine heartworm can be present. The Anopheles breed is the most fatal mosquito.

This mosquito transmits malaria through a parasite in its system. Estimates are a million deaths per year, making it the most dangerous “animal” in the world.

This isn’t anything new, either. Historians believe Alexander the Great met his demise this way in 323 B.C.

What Can Kill Mosquitoes for Good?

Mosquitos do have natural predators. Though many believe bats eat them, they don’t or at least not in great quantities. But, birds and dragonflies eat adult insects.

Fingerling fish eat the eggs and larvae of mosquitoes. There are some natural items which will keep them at bay, such as fire pits and sprays. For water features around the home, sprinkling coffee grounds will kill the eggs.

Preventing them in the first place will help keep your home safe. But, keeping the female adult insects away is essential too. They need 2 1/2 times their body weight in blood every day, and they’re not picky about from where it comes.

Have some measures in place to rid your home of them. This will ensure you and your family do not become a tasty mosquito buffet. Year round.

What Attracts Mosquitoes in the First Place?

Because the female mosquito is all about reproduction, they look for life-giving blood. It’s this steady diet which helps in their egg production. Since it comes from humans, each sign we give them signals dinner.

They attract to carbon dioxide we breath out, smells like sweat, and thin skin areas like faces and ankles. As we know, light sources can bring them in too.

Zappers and nets both attract and kill insects without any pesticides. Safe and effective, they let you enjoy your home rather than share it with untoward guests. Check our reviews for the best products for you.