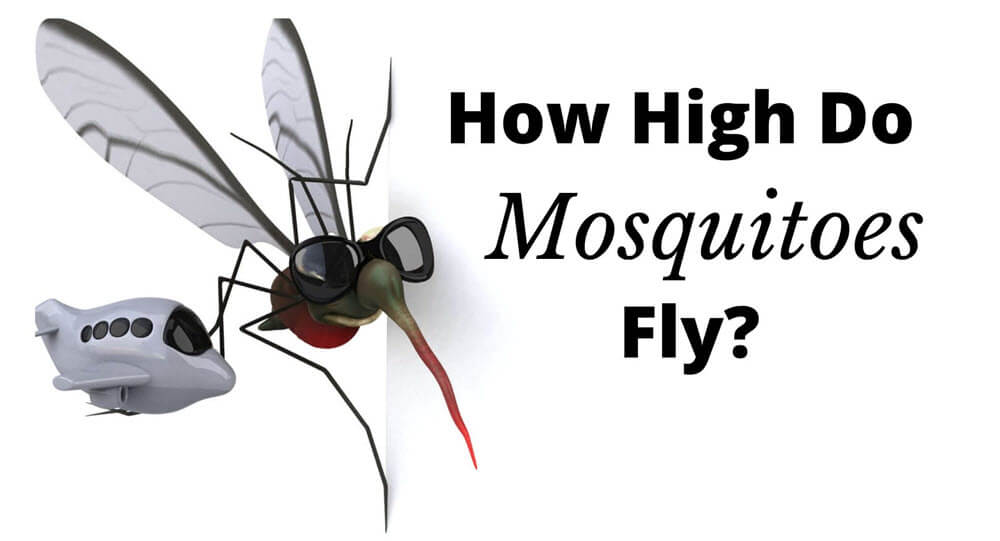 It’s widely believed that mosquitoes fly no higher than 25 feet. But of course, it depends on the species and climatic conditions.

Would a salt marsh mosquito, that can fly over 40 miles to find a blood meal, fly at the same height as an Aedes aegypti that only travels only a few hundred feet? No, probably not!

Why Would Mosquitoes Fly High?

Mosquitoes breed at ground level, in still water, and find their shelter a few feet from the ground. Also, in general, the food they eat, nectar from flowers or blood from humans and animals, is found near the ground. This is at least true for the most common mosquitoes that bite humans.

As these mosquitoes don’t usually travel far, they have everything they need a few feet from ground level. Why would they fly higher?

However, there are exceptions that have been subject to some research. The Aedes taeniorhynchus, or the black salt marsh mosquito, is a mosquito that can fly over 40 miles with prevailing winds to find a blood meal. Flying long distances, you would expect it to fly at a greater altitude.

To see if this was the case, a helicopter was flown at different heights at the same time the mosquitoes were on the move. The helicopter was equipped with sticky paper mounted under the fuselage, to trap the mosquitoes. After each trip at a certain height, the sticky paper was changed and the salt marsh mosquitoes trapped were counted. It was found that the majority of mosquitoes were flying at or below 100 feet. Not very high considering the distance they were covering!

This shows some mosquitoes might fly at about 100 feet but most stay quite close to the ground where they have their breeding grounds and food sources.

However, before you think you now know how high mosquitoes fly, here are the results from research involving malaria-carrying Anopheles mosquitoes.

This study in Africa used helium balloons to cast sticky nets above the ground at 130 feet to 950 feet (40 to 290 meters) high. This research was to show that the mosquitoes could travel long distances using the wind. In this case, the distance traveled was nearly 200 miles (300km) in one night.

Over 600 nights the researchers caught 450,000 insects, including 2,748 mosquitoes. In this study, more mosquitoes were caught higher up on the nets.

The result of the study suggests that malaria-carrying mosquitoes could be using wind to travel hundreds of miles each year at altitudes of up to 950 feet. This means that mosquitoes could reinfest a region after being eliminated.

Another place mosquitoes can be found at a higher altitude than expected is in multi-story buildings. They can come in the lift, fly up the elevator shaft, or be propelled through the ventilation ducts. They may even be born on one of the upper stories having been brought in as eggs in plant pots or some other water-filled container.

So living on the top floor of a multi-story building doesn’t guarantee you will totally escape the skeeters. But you will see a lot less than if you were on the ground floor.

At What Altitude Will You Still Find Mosquitoes?

The aforementioned research has demonstrated that mosquitoes have been found flying at around 950 feet above ground level. But can they survive at high altitudes?

Mosquitoes have been discovered breeding as high as 8000 feet in the Himalayas. At the other end of the scale, they survive 200 feet underground in mines in India and they have lived in the London Underground for years.

The altitude at which mosquitoes are found will depend on the species. The Centers for Disease Control and Prevention (CDC) has said Zika is rare above 6500 feet. Dengue and Zika viruses are transmitted by the Aedes mosquitoes, primarily the Aedes aegypti.

For the Anopheles mosquitoes which transmit malaria, the altitude at which they can be found is less clear. Where they are found depends on temperature, humidity, and rainfall. Global warming means the disease has expanded into areas that were previously malaria-free. Malaria cases are now frequent at altitudes of 5000 – 8000 feet.

This shows that mosquitoes can exist at least as high as 8000 feet and this threshold will increase as the planet gets hotter.

You should now have a better idea of how high mosquitoes fly. Most of the common mosquitoes will stay quite close to ground level. When traveling greater distances mosquitoes will take extra height, up to 950 feet, and so take advantage of the prevailing winds.

Living at altitude or on the upper floor of a high rise building doesn’t mean you will be safe from mosquitoes. They will still be present but perhaps in lower numbers.

It only takes one mosquito to spoil your night’s sleep or even worse to give you a nasty virus.

Wherever you are, in your house with a garden or in a fifth-floor apartment with a terrace, make sure you eliminate any mosquito breeding grounds (still water).