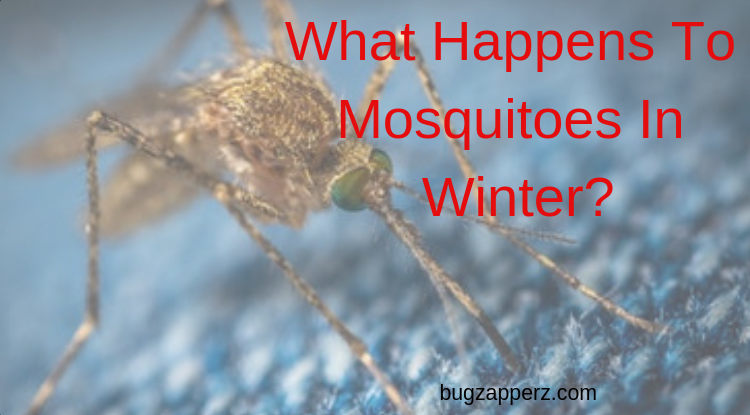 Pesky, annoying, irritating, the bane of summer…Whatever you want to say about mosquitoes, you have to admit that they’re extremely resilient.

Fossil evidence shows that the mosquitoes we battle with today are practically identical to the mosquitoes that were buzzing around 46 million years ago.

This means that, unlike dinosaurs, mosquitoes survived the ice age that took place 2.5 million years ago. As such, it’s not surprising that a few months of cold weather is unlikely to stop a mosquito in its tracks.

But, these cold-blooded insects prefer temperatures in the 80s and above. In winter, the female mosquitoes become inactive, find a shelter, and hide away until the warmer weather returns.

Where do Mosquitoes Come From?

While the word ‘mosquito’ has Latin origins and means ‘little fly’ in Spanish, the insects themselves are thought to have originated in South Africa.

Of course, they’ve made a very good job of spreading to the rest of the world. In fact, mosquitoes live in every land region except for Antarctica and several polar and sub-polar islands.

One such island is Iceland. So, if you’re one of those unlucky people who get bitten by mosquitoes more than others, maybe Iceland could be a good place to head for your next vacation.

There are now thought to be between 2,700 and 3,500 different species of mosquito. A lot of the differences between these species relate to the ways in which they have evolved to adapt to their distinct environments.

How Long do Mosquitoes Live?

Like all flies, mosquitoes complete four stages in their life cycles: egg, larva, pupa, and adult. The first three stages last between five and 14 days, depending on the ambient temperature and the exact species of mosquito.

After the mosquito emerges from the mature pupa, its lifespan depends on its sex. Male mosquitoes only live up to 10 days, and they die after mating. In contrast, although it varies between species, female mosquitoes can live for between eight weeks and several months.

For optimal survival, mosquitoes like warm, wet temperatures. So, female mosquitoes living in hot and humid climates have the most chance of surviving the longest.

Summer is prime time for mosquitoes. The weather is warm and there are plenty of bare arms and legs for the female mosquitoes to feed off the blood of unsuspecting victims.

In the fall, the female mosquito lays her eggs in areas of moist ground. This moisture helps to support life, as the mosquitoes need water throughout the first three stages of their life cycle.

Female mosquitoes can lay an incredible 300 eggs at a time. Depending on the temperature at the time, these eggs may hatch, or they may lie dormant in the moist soil until the spring. If the weather is cold, the eggs will hatch when the temperatures begin to rise and there is enough rain.

So, we know that in fall, mosquitoes are busy preparing their offspring for the cold weather ahead. But, where do mosquitoes go in the winter?

Do Mosquitoes Die in the Winter?

Due to their limited lifespan, male mosquitoes never even make it past the fall. Female mosquitoes, however, are better equipped to deal with cold weather.

Once the temperature drops below 55 degrees Fahrenheit, mosquitoes seem to disappear. But often, they just stop moving around as much.

But, how do mosquitoes survive winter?

Female mosquitoes survive by spending the colder months of the year inactive in protected places. These places might include animal burrows or tree hollows. Some mosquitoes also seek refuge indoors, where they can hide in protected entryways to escape from the cold outside.

Once she has a place to spend the winter, the female mosquito enters a period of dormancy or hibernation, much like bears, chipmunks, and bats. She can hibernate in this way for up to six months.

Before hibernating the mosquito will add body weight by changing from a blood diet to a diet containing more sugar. They will get the sugar from rotting fruit and nectar. Doing this they may double their weight.

Scientists have recently discovered that the change of diet is triggered by the length of the day. As the days get shorter the mosquito changes to a sugar-rich diet.

So, in answer to the question, while male mosquitoes die long before winter even starts, female mosquitoes have the potential to survive even the coldest winters.

Surviving the Winter in the Larval and Pupal Stages

Mosquitoes are so resilient, they can survive the winter before they even enter the adult stage of their life cycle.

Certain species of mosquitoes found in regions with freezing winter periods can spend part of the year in a state known as diapause.

Diapause is a period of suspended development where the mosquito can effectively pause its life cycle in the larval or pupal stage. During this time, metabolism drops, and development is delayed. They can remain in a state of diapause for up to six months.

When the temperatures warm up, this warms up the water holding the larvae and pupae enough to satisfy their immediate needs. Then, the mosquitoes can continue with their life cycle.

For female mosquitoes with eggs to deposit, the warmer weather draws them out of their winter hibernation and into immediate action. The first signs of rising temperatures mean she must find blood to help her eggs develop.

So, as people start heading outside, rolling up their sleeves and embracing the long days of spring, newly-awakened mosquitoes are also out in full force.

After feeding off the blood of an unsuspecting victim, the female mosquito will rest for a few days. Following her rest period, the mosquito will lay her eggs in whatever standing water she can find nearby.

And so, another female mosquito has survived the winter and has successfully brought a new batch of little blood-suckers into the world.

What Happens to Mosquitoes in the Winter?

Thanks to this guide, you now know the answer to this question.

Just remember, one of the places that those sneaky female mosquitoes like to hide out is in the entryways of your home. They may also be found in cellars where the temperature is warmer than the outside temperature.

So, it’s important to clean those areas and protect your home with natural repellents and mosquito zappers, even in the colder months.

Outside you can find mosquitoes in hollow logs, in animal burrows, or under piles of leaves.

These little insects will be back to bug us as soon as the temperatures start to rise!