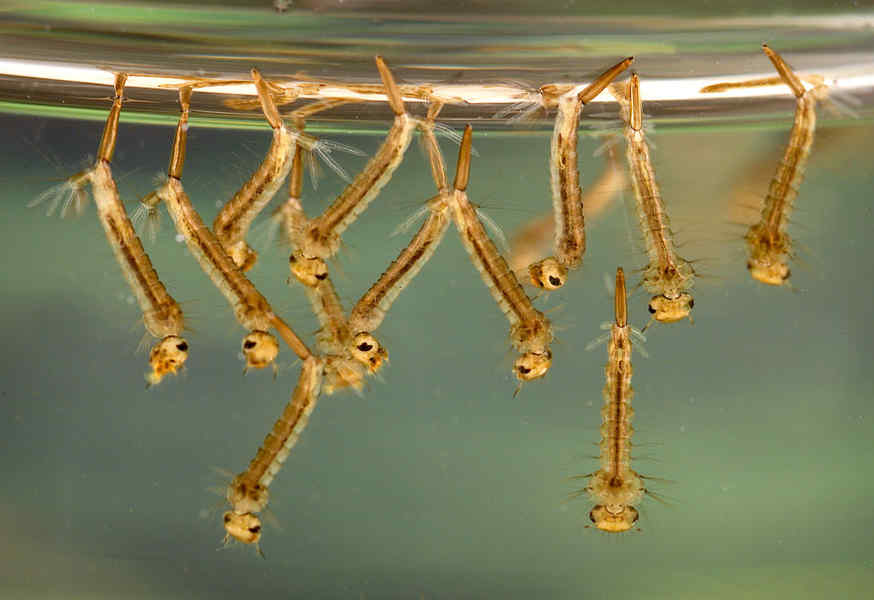 When combatting mosquitoes or other living forms, it’s always a good idea to understand their life cycle. It might just help you prevent having them around your home or garden.

*Imago is the last stage an insect achieves during its metamorphosis (the fully developed adult stage of an insect).

The different species of mosquitoes have different ways of laying their eggs.

The eggs can be laid one by one or attached to form a sort of raft. Some species lay their eggs on the surface of the water and others out of the water. Eggs laid above the waterline will hatch when the water rises

Eggs laid on the water’s surface hatch within a relatively short period of about 48 hours.

Eggs laid out of the water can survive up to 8 months without water. They will hatch in a few days when covered with water.

Certain mosquitoes lay their eggs on damp soil that will be flooded with water. These eggs need to dry out and can survive winter, waiting for storms and being inundated with water before hatching.

The common point with all mosquito eggs is that they need water to hatch.

The larvae are also known as “wrigglers or wigglers” due to the way they rise to the water’s surface through jerky movements of their bodies.

Most larvae come to the surface to breathe. They have tubes for breathing and hang upside down on the water surface. Different species breathe by lying parallel to the water surface or by attaching to plants.

The larvae feed on algae and microorganisms in the water and molt, or shed their skins, 4 times, each time getting larger. After the fourth molt, the larvae metamorphose into pupae.

The larval stage can last from several days to several weeks, depending on the species and the conditions, such as water temperature.

The pupae are also known as “tumblers” due to their swimming action of flipping their tails. The pupae float to the surface of the water and breathe through two tubes.

The pupae don’t feed in this development stage, and they are less active than in the larvae stage. They spend most of their time hanging from the surface of the water, only diving deeper if disturbed. When the pupae are fully developed, the skin splits, and the adult mosquito appears.

The pupal stage of development can take between 2 days and a week. The speed of this development depends on species and temperature.

After emerging, the adult will rest on the water surface to dry and allow its body parts to harden.

The adult mosquitoes normally mate a few days after the pupal stage. For most species, mating takes place by the males forming large swarms around dusk into which the females fly to mate.

The males usually live from 5 to 7 days feeding on nectar and other sources of sugar. The females usually live for 2 or 3 weeks. This will depend on the species temperature, humidity, predators, and the defenses of their hosts. Species that can survive the winter in attics, animal burrows, or hollow logs may live for up to 6 months

Once the female has had a blood meal, she will rest for a few days while the blood is digested and the eggs are developed. When the eggs are ready to be laid, the female will find a suitable place to deposit the eggs and then go looking for a new host to renew the process. The female doesn’t need to mate again.

A female mosquito can lay as many as three sets of eggs before dying.

How long do mosquitoes live?

Most adult female mosquitoes live 2 or 3 weeks; this can depend on the species. Male mosquitoes have a shorter life span of 5 – 7 days. Some species find shelter and live throughout the winter for up to 6 months.

Do mosquitoes die after they bite you?

No mosquitoes don’t die after biting. They bite to get protein to develop their eggs and can lay several batches of eggs, so they might bite humans several times. One mosquito might bite you several times the same night if she is interrupted.

Why do mosquitoes need blood?

Blood is full of protein, which makes it the perfect supplement for growing mosquito eggs. It’s essential for their reproduction process. This is why only females bite. Both males and females feed on plant nectar for energy.

How long does it take mosquitoes to go from an egg to an adult?

The entire cycle takes approximately 8 to 14 days. This depends on the species and the temperature. In general, the warmer it is, the faster they will develop. The optimal temperature is about 28 – 33°c (82 – 91°f).

Do mosquitoes travel far from their breeding grounds?

Generally, mosquitoes don’t travel far from their breeding grounds. Most have a 1-3 miles flight range. Although there are exceptions, the saltmarsh mosquito will fly up to 40 miles in search of a blood meal.
Many common mosquito species won’t travel more than 300 feet from where they hatch. This is why eliminating standing water around your property can greatly reduce the number of mosquitoes bothering you.

There are quite a few predators for mosquito larvae – most pond fish, some frogs and tadpoles, toads, dragonfly larvae, some waterfowl, some birds and insects (backswimmers, pond skaters, aquatic beetles…)

Do mosquitoes die after laying eggs?

Female mosquitoes usually mate only once but they can lay several batches of eggs. Typically one batch of eggs after every blood meal. So they don’t die after laying their eggs.