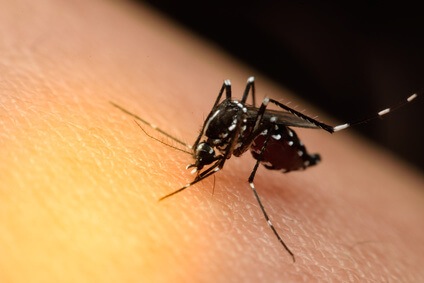 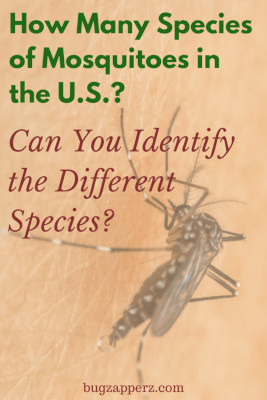 Mosquitoes are thought to have been on Earth for more than 100 million years. Researchers and scientists have spent many hours studying, breeding, catching and then grouping them into genera and species.

The Dangers of Mosquitoes

You might ask, why spend all this time and effort categorizing mosquitoes? Mosquitoes can be considered the most deadly animal on Earth with many hundreds of thousands of deaths every year and several diseases provoked by mosquito bites.

So getting to know the habits of each kind of mosquito can be considered very important. This might enable scientists to figure out the best ways of eliminating or controlling a particular species. Hence protecting the population. 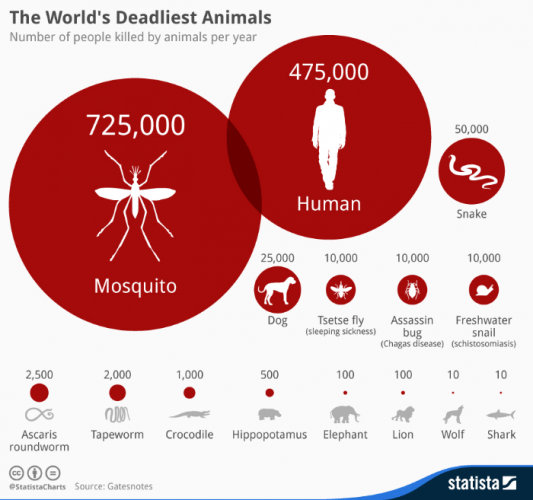 You will find more statistics at Statista

Below is a list of some of the genera and species found in the United States.

Aedes is a genus of mosquitoes that was originally found in tropical and subtropical regions but has now spread to all around the world excepting the Antartic.

Is a small dark mosquito that can be recognized by white markings on its legs and upper thorax.

This species of mosquito, like artificial or natural water containers near to human habitations. For example, blocked gutters, old tires, dishes under potted plants or buckets. They have also been found in underground water such as unsealed septic tanks, storm drains or wells.

The eggs can survive long dry spells. They 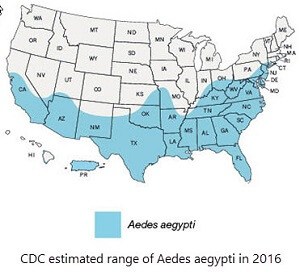 wait until there is rain or flooding before they hatch.

The Centers for Disease Control and Prevention (CDC) have produced a map showing the estimated range of the aegypti mosquito in the US.

The aedes aegypti is most active for a couple of hours after the sunrise and just before sunset. It can continue to bite throughout the night especially in well-lit areas. Although this mosquito seems to prefer humans it can also bite animals.

The diseases transmitted by the Aegypti include dengue fever, chikungunya, yellow fever, and zika.

Also known as the Asian Tiger mosquito, the Aedes Albopictushas has spread into many countries worldwide due to the transportation of goods. A small mosquito recognized by the black and white stripe on its body and legs.

A small mosquito recognized by the black and white stripe on its body and legs.

Its main biting time is early morning and late afternoon. Feeds on mainly on mammals including humans.

The Aedes Albopictus transmit a number of diseases including the dengue and chikungunya viruses. It has also been found to be infected with the following viruses: West Nile, Eastern equine encephalitis, Japanese encephalitis and can also transmit dog heartworm parasites.

In the US it has spread into most southern states as you can see from the map produced by the CDC.

This mosquito is common in states east of the Mississippi and along the Atlantic coast just to north Florida. The eggs can survive winter and hatch in the early spring. It favors wooded habitats and doesn’t venture far to find its prey. A day biting mosquito, it can carry West Nile virus, Eastern equine encephalitis virus, and dog heartworm.

This mosquito is also known as the Eastern Saltmarsh Mosquito and is normally found in coastal areas just a few miles inland from the coast. A native of the east coast from Canada all the way down to the Bahamas.

A species that is found almost worldwide. They lay their eggs on damp soil above the water line, after drying when there is heavy rain and the water level rises the eggs hatch.

These mosquitoes have been found as far as 15 miles from their birthplace but normally will only travel as far as necessary to find food and water.

The females bite in the evening and night, preferring larger mammals and humans if present. The Aedes Vexans are known to be vectors of West Nile virus and dog heartworm

A genus of mosquitoes with more than 430 species of which about 30 – 40 can transmit Malaria. They used to spread malaria in the US before it was eradicated in the 1950s. There are still isolated cases of malaria in the US but most cases are imported by people returning from malaria-endemic countries.

Anopheles quadrimaculatus and Anopheles freeborni were the primary vectors of malaria in the United States.  Apart from malaria, some species of Anopheles mosquito can transmit the heartworm parasite. This can be very dangerous to dogs and cats.

Anopheles can be easily identified by their resting position, their stomach is pointed upwards. Unlike other genera who keep their bodies parallel to the surface, they are resting on.

The female anopheles feed on large mammals, such as cattle and some species in Africa seem to prefer humans which make them very efficient malaria vectors.

Females lay eggs individually on the surface of the water, the eggs have floats to keep them on the surface until they hatch. Eggs can be laid, in streams, ponds, roadside ditches or lakes.

This dark brown mosquito is found in central and eastern USA. The Quadrimaculatus is the most important species regarding malaria transmission in the US.

Their preferred breeding ground seems to be clean water such as permanent freshwater pools, ponds, and swamps that contain aquatic vegetation or floating debris. During the day the mosquitoes rest sheltering in caves, buildings or anywhere cool and humid.

These mosquitos are found around the west coast and used to be a vector of malaria in the US. They seem to prefer clear water and pools that have some sunlight during the day but also have vegetation. When resting they will find a shaded cool place but seem to prefer to be outdoors.

The Freeborni will readily enter habitations and bites both humans and animals. They are mainly active at dusk and during the night but might bite occasionally during a cloudy day or if a human is in a shaded area.

The Culex genera count nearly 1000 species,  They are found worldwide except in the northern region of the temperate zone with more than 30 found in the US.

The adults are active at dusk or during the night are vectors for several diseases – arbovirus infections, West Nile virus, filariasis, Japanese encephalitis, St. Louis encephalitis, and avian malaria.

Lives in the temperate regions of the northern and southern hemispheres, the Culex Pipiens is the most common mosquito in urban areas. Breeds in dirty polluted water in small containers, septic tanks or ditches.

The Common House Mosquito feeds on birds and mammals including humans. As its hosts are often birds it’s difficult to contain the spread of diseases.

A medium sized mosquito about 4mm long, with a brown body, is found in the southern USA. Lays egg in rafts and breeds in dirty water such as stagnant drains, septic tanks, and almost all organic polluted water collections.

Lays egg in rafts and breeds in dirty water such as stagnant drains, septic tanks, and almost all organic polluted water collections.

These mosquitoes feed on mammals and birds throughout the night.

Culiseta genera mosquitoes are adapted to cooler climates and only appear in warmer climates in the cool parts of the year or otherwise at higher altitudes where it’s cooler.

They are dark or brown quite large mosquitoes and lay their eggs on the surface of stagnant pools of rainwater. Certain species of this mosquito have a strange life cycle, in that they overwinter as larvae as opposed to being adults.

These mosquitoes seem to prefer animals and birds to humans and are responsible for spreading Eastern Equine Encephalitis.

The most common species of this mosquito found in the US is the Culiseta inornata. They are found from sea level to over 10,000 feet in altitude and the larvae are even found in salt marshes. They are known as the “winter mosquito” and will hibernate in the north but in the milder south will stay active.

This genus of mosquitoes comprises 57 species of which the best known is Coquillettidia perturbans. They exist throughout the US although they are more prevalent in the south. These mosquitoes are mostly found in areas of dense vegetation, that have warm summers and a high level of humidity.

They lay their eggs in the form of a raft. When hatched the larva rest beneath the surface of the water, they pierce a hole in an aquatic plant to breathe.

They bite mostly in the evening and at night but they will also bite during the day if you go near their resting place. This mosquito is a known as a vector of West Nile virus and Eastern equine encephalomyelitis

Used to be a subgenus of Aedes until 2000 when they became two distinct genera. There are many different species found in the US and they are known vectors of several diseases notably  West Nile virus, eastern equine encephalitis virus, and dog heartworm.

Some of these mosquitoes might still be included in the Aedes genus.

The Psorophora genus contains 50 species, of which 13 are found in the US. The adult mosquitoes range in size from small to very large. These are floodwater mosquitoes, the females lay their eggs on the soil and they can dry out for many months and then hatch when the habitat is inundated with flood waters.

Most species of these mosquitoes bite at crepuscule and in the night.

Is a large mosquito that is known as the “gallinipper” due to their aggressive biting. They are found in the eastern U.S.

The larvae are much larger than most and will prey on other mosquito larvae and even tadpoles.

The females bite large mammals including humans and are most active in spring or summer.

Often referred to as the “Black Rice Field Mosquito”, it’s a medium-sized mosquito recognizable from it dark brown or black color and white or yellow markings.

The columbiae is found from Florida to New York with scattered populations across the US. The greatest numbers are found in the rice-growing areas of the southwest. There are reports that in large numbers they can kill livestock. The mosquito is a vector of Venezuelan equine encephalitis and anaplasmosis in cattle.

Commonly known as the “White-footed Woods Mosquito” or the “White-footed Mosquito”. It is easily recognized by the white segments on the legs. A medium sized mosquito that prefers wet wooded areas and lays its eggs in temporary woodland pools.

A medium sized mosquito that prefers wet wooded areas and lays its eggs in temporary woodland pools. Found in southeastern parts of the U.S.

The females prefer blood from mammals and are aggressive biters. Will bite in the day or night.

The Psorophora ferox is known to carry a number of diseases such as Venezuelan equine encephalitis virus or West Nile Virus but is considered to be a minor vector.

There are a few other genera and many other species found in the United States today. With the changes in climate, we are likely to find more tropical species invading the temperate zones and mosquitoes that prefer cooler climates may disappear from these zones.

This may provide public health problems, altering the ranges of known current diseases and perhaps importing new diseases as is the case recently with Zika.

Mosquitoes can be a major health concern no matter where you live. Their bites can cause allergic reactions and spread diseases to humans and animals. Therefore, you need to take precautions when you’re outdoors.  Eliminate any standing water, use an insect repellent such as DEET, wear long sleeve shirts and trousers and install traps or repellent devices. 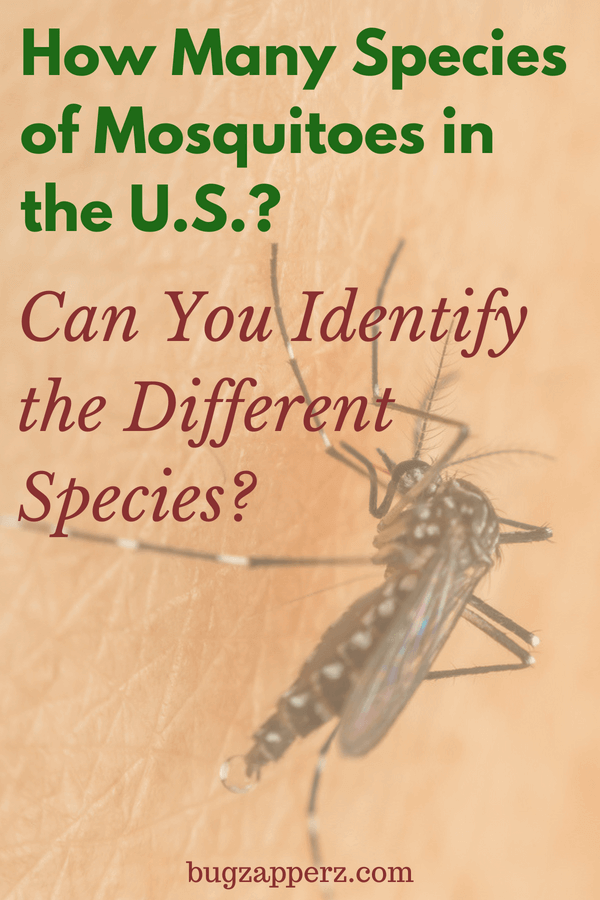