If you are one of the unlucky ones to whom mosquitoes are attracted, the summer can be an agonizing time of scratching and hiding under the covers. The most bucolic country retreat or lakeside getaway can be marred by swarms of pests feasting on your blood.

A bug spray might get the job done effectively, but you may be curious about more long-lasting and natural solutions. Isn’t there a way to attract wildlife to your property to eat the bugs that detract from your enjoyment of the great outdoors?

Birds that eat mosquitoes are a great way to curb the impact of those nasty biters. By planting flowers or building structures to attract these species, you will create a beautiful landscape that will have the double benefit of reducing the mosquito population.

Here are 5 birds that eat mosquitoes. Invite them into your backyard, and they might help make the great outdoors a little more inviting.

Purple Martins could be one of nature’s best mosquito repellents.

Although they are not actually purple, they are prized for their beautiful singing.

Although some say they can eat up to two thousand mosquitoes per day, there is no factual evidence to back up this claim. In any case, mosquitoes only make up a small part of their diet.

Purple Martins love to be around people, and they often live in manmade “apartment-style” birdhouses. Found in almost every region of the United States, these bug-eaters like to nest by streams, rivers, and marshes- generally, the wet areas where mosquitoes like to breed.

In addition to mosquitoes, these birds also like to eat beetles, flies, moths, and dragonflies, which also eat mosquitoes.

The best way to attract these birds that eat mosquitoes is to build a house for them, not too far away from your own house and a source of fresh water.

You can make the house even more appealing to them if you give them some nesting materials like leaves, mud, and feathers, plus eggshells!

Barn Swallows are related to the Purple Martin and are also famous as one of the kinds of birds that eat mosquitoes.

They often swoop and dive to catch their prey in aerial acrobatics. They catch those little buggers one at a time and eat them right up.

The Audobon Society estimates that one swallow can consume 60 bugs per hour or 850 per day. Yum!

If you want to attract barn swallows and other insectivores, first, you should stop using pesticides. Although you are trying to get rid of the bugs, you will need the bugs to initially attract the birds that eat them!

You are more likely to attract these birds that eat mosquitoes if you live near a body of water. Even if you don’t, you can provide them with a cool drink. Fill up a birdbath or fountain, or even leave your sprinkler on regularly.

Swallows also like to perch on wires or clotheslines. They have been known to nest in birdhouses or even hollowed-out gourds. True to their name, barn swallows especially love to nest under the eaves in a barn, high up away from predators.

Songbirds like Blackpoll Warblers love to eat mosquitoes as well. They actually prefer insects with segmented bodies, like centipedes, millipedes, spiders, and lice, plus fruit and seeds.

But they won’t turn down some tasty mosquitoes either. So if you are interested in this natural approach to pest control, don’t shoo away the songbirds.

They probably won’t solve your entire mosquito problem, but they will help out and provide some pretty music at the same time.

Ducks and geese congregate on the water not only to paddle around. These waterfowl eat massive amounts of mosquitoes!

Because ducks live on the water, they often go after the mosquitoes before they even hatch. Mosquitoes lay their larva in water; ducks will go after them before they are born and begin to cause you agony.

Special species of waterfowl that are best for eating mosquitoes include the Muscovy duck and India Runner ducks. If you live near a pond or lake, encouraging these birds to nest there will help with the insect population.

If you have a pond, the presence of fowl will also encourage other mosquito-eaters to congregate there, like various species of fish plus dragonflies, turtles, rigs, and toads.

Bats are not technically birds, but lately, some communities have expressed interest in using these creatures to control their insect populations.

Bats are exclusively insectivorous, but they mostly eat beetles, wasps, and moths. They generally eat whatever they can get their fangs into.

Some people report that bats help them control mosquitoes on their property. Researchers have found that bats in a laboratory room can catch up to 600 mosquitoes per hour.

Bats like to make nests, so they may make their shelters in old trees and large shrubs. They also congregate in abandoned buildings, hollow trees, under the eaves of a barn, or loose tree bark.

If you want to attract bats to your property to eat flying insects, you might try to build a bat house. Hang a box made of plywood or cedar in a sunny spot about 10-15 feet above the ground. Those woods’ rough surface makes it easier for bats to climb in and out of the house.

You can also plant a night garden with flowers attractive to these creatures. Some night-bloomers include datura, moonflower, four-o’clock, yucca, evening primrose, night-blooming water lily, night-blooming jessamine, cleome, and nicotiana.

Don’t pay attention to all of the myths about bats. They can carry rabies, but so do many animals in the wild. They are rarely a danger if you leave them alone. And bats are neither vampires nor emissaries of the devil!

Birds That Eat Mosquitoes: A Natural Solution to a Pesky Problem

You may wish to stick with natural ways to prevent the scourge of mosquitoes. Birds, fish, bats, and other animals may help you curb the pests without damaging the environment with pesticides or traps.

Birds and other natural predators can all play a part in mosquito control. They will not eliminate these pesky insects entirely, but they should be encouraged as they are beneficial in other ways.

However, sometimes you may need extra assistance from technology. For more information on a variety of effective ways to fight mosquitoes, check out our blog. 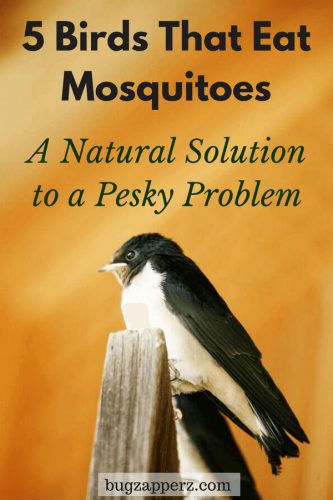 2 thoughts on “5 Birds That Eat Mosquitoes”