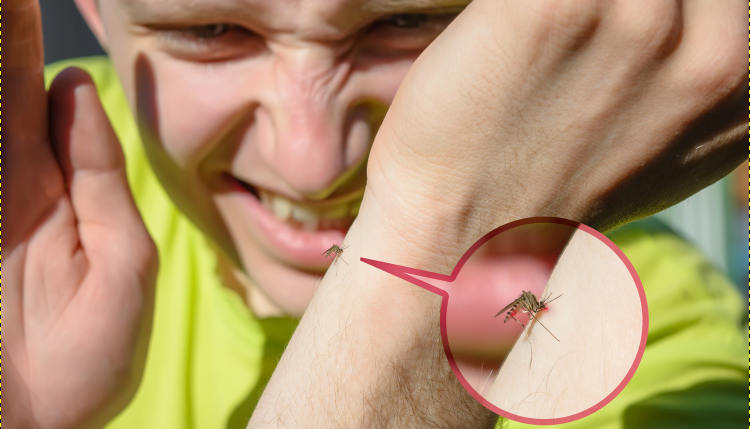 Nothing spoils a good night’s sleep or an evening of outdoor summer fun than an attack from a blood-sucking insect.

There are over 3,000 species of mosquitoes found worldwide. Most of them are harmless to humans. Some of them can carry deadly diseases such as Zika Virus, West Nile Virus, and Malaria.

If you seem to get an unfair amount of attention from these buzzing creatures, it pays to know what attracts mosquitoes to humans and find a way to avoid them.

What Attracts Mosquitoes to Humans

Every year mosquitoes kill more people than any other animal and there’s no way you can hide from them.

Male mosquitoes happily exist on a diet of flower nectar. It is the female of the species that hunger for blood, and they are coming for you.

Protein from blood is vital to the reproduction of most species of mosquitoes. It works to assist in egg production.

Mosquitoes can locate a human being from over 50 yards away. They are drawn towards us by body heat and carbon dioxide emissions from our breath.

They can even follow trails of carbon dioxide left behind in the air and track you down that way.

It is only when they get closer that they choose the most desirable victim based on certain criteria.

Research shows that genetics is one of the biggest factors when it comes to what attracts mosquitoes to humans.

However, this could simply be because related people are more likely to share several of the other characteristics that mosquitoes prefer.

It’s in Your Blood Type

Research shows that mosquitoes are 83% more likely to snack on a Type O feast than any other blood type. Their next favorite is Type B and Type A is the least preferred.

About 85% of people secrete these, so you may be overlooked by mama mosquitoes if you are one of the lucky few who doesn’t.

The bigger you are the more you breathe, making you a hot target for mosquitoes. This also explains why mosquitoes zone in on adults more than children.

Pregnant women are another favorite for hungry mosquitoes, but this has nothing to do with size. During pregnancy, body temperature increases by 1.26 degrees Fahrenheit and respiration increases by 21%.

These slight changes are enough to make mom-to-be suffer twice as many bites as usual.

Mosquitoes are drawn towards signs of exertion. The lactic acid that your body produces during exercise is secreted in your sweat, and it’s responsible for what attracts mosquitoes to humans.

Masking body odor with perfumes and sprays can be effective against mosquito bites. Be advised though, there have been cases where mosquitoes find the scent of perfumes just as appealing.

Showering as soon as possible after exercise can help to reduce your pulling power for mosquitoes.

A shower will also help to remove the normal daily buildup of bacteria on the skin. Bacterial action is what gives sweat its distinctive smell – one which mosquitoes love.

This explains why these insects often target areas where bacteria are more likely to gather, such as on our feet, or nearby.

While your friends may want to run a mile when you take off your sweaty trainers, mosquitoes will be traveling in the opposite direction.

Studies show that smelly feet can pose an unexpected health risk too.

Malaria-carrying Anopheles mosquitoes have been seen to have a preference for the smell of Limburger cheese.

The bacteria that gives this cheese its distinctive aroma is called Brevibacterium Epidermidis. It is remarkably similar to the ones responsible for causing smelly feet.

On the upside, leaving those trainers outside could throw them off the scent.

Apart from your feet, mosquitoes target areas where the blood is closest to the skin. These include the forehead, wrists, elbows, and neck.

Cover up these sensitive areas when you are outdoors to foil their dinner plans and ensure you have a peaceful night out.

Darker colors are more eye-catching to mosquitoes than light ones. Wearing light-colored clothing can help you to escape detection, or at least make you look like a less appealing meal.

Black and dark blue clothing should be avoided if you want to deter mosquitoes. White and khaki outfits are the best bet to stay off their radar.

Lady mosquitoes like their beer it seems. Studies have revealed that as little as 12 ounces of beer can make you more likely to end up with a few extra mosquito bites.

Nobody really knows why this is part of what attracts mosquitoes to humans. Even after the usual suspects such as ethanol excretion and elevated temperature were eliminated, mosquitoes still came back for a bite of the beer drinkers first.

Why That Irritating Buzzing Is Good News

Both male and female mosquitoes create a buzzing sound effect wherever they go. The sound is caused by the motion of their wings during flight.

As they cannot feed and fly at the same time – silence is bad news and means they have found somewhere to settle down for a meal.

How to Avoid Being Bitten

There are ways to limit your exposure to mosquitoes. Avoid areas with pools of stagnant water, as these are where mosquitoes breed.

Mop up any pools of water around your house and fill in any holes where water can gather during the rainy season.

You owe it to your pets to keep your garden free of these pests. Mosquitoes can carry heartworm which may be fatal to cats and dogs.

Certain types of plants can help to keep mosquitoes at bay around your home and some of them are even suitable for indoor use.

Your Next Step: Be Ready

When it comes to mosquitoes, your best form of defense is attacking.

Insecticides, bug zappers, and insect repellants are the most effective ways to stop them from making a meal of you.