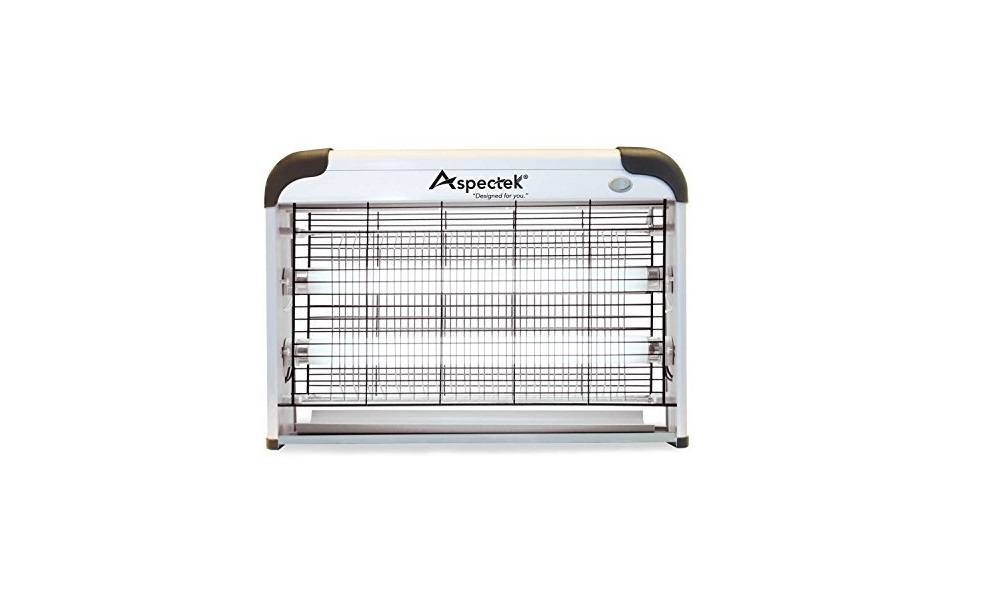 I may earn a commission for purchases using links on my site. Learn more.

You may feel hopeless with all the flying bugs and insect pests that exist in your house. You may have also tried everything, but they will just not disappear! Instead, they keep coming back, giving you itchy bites and disturbing your life.

You may need a device that will not let them get near you. Well, there is just such a thing, something called a bug zapper. And the Aspectek Electronic Indoor Killer may be the one you need to try to make your life peaceful!

As an Amazon Associate, I earn from qualifying purchases.

What Insects Can You Kill with the Aspectek Bug Zapper?

This electronic insect killer will kill any flying insect found in your house attracted by UV light. This could be flies, moths, stink bugs, ants, beetles, wasps, midges, and mosquitoes.

The problem with an outdoor bug zapper is that it kills many beneficial insects. As this zapper is for indoor use, this isn’t a big issue.

Placement of Your Zapper

You can place the insect killer on a flat surface or suspend it with the included metal chain. But make sure the indoor bug zapper isn’t visible from your windows or doors, or you risk attracting even more flying pests into your house. And it could be a mosquito that will be more interested in you than the ultraviolet bulb.

If it’s placed in a kitchen or dining area, the insect zapper should be placed at a distance from where you prepare food or eat. You don’t want dead insects or parts of insects falling into your plate.

If you have children or pets, it’s probably best to hang the device using the chain provided to prevent any risk of it being knocked over or poked by exploring fingers.

The Aspectek Electronic Indoor Insect Killer is the ultimate zapper! It has a protective cage to prevent you, your kids, and your pets from having accidental contact with the grid.

The zapper arrives assembled. Just get it out of the wrapping, cut a couple of zip ties, and you’re ready to go.

The bug zapper bulbs are expected to last about 2500 hours. The unit has no attractants, other chemicals, or other recurring expenses, so the running costs are very low.

You can use the wire chain if you want to hang it, or you can just set this device on a flat surface. Its electronic grid is also very powerful, plus it collects dead insects by using a removable and washable tray.

Moreover, this one is designed for indoor use, such as the kitchen, living room, basement, café, enclosed garage, store, restaurant, hospital, office, and other places. Once you turn it on, it lures mosquitoes, flies, and other annoying insects to the grid, where they will all be quickly zapped.

Two spare ultraviolet bulbs come with the product and are specially designed for attracting flying insects.

There is no hassle for you as well because you do not need maintenance for this one. Empty the bug tray when you see it is full, then wash the tray afterward. Additionally, this insect killer is considered a chemical-free alternative, making it safe to use in places where pesticides are not allowed.

What’s more, you can use this for a long time because it has proven to be durable even after using it for a year. Frankly, this insect killer is worth the price as it is robust and effective in making your house free of flying insects!

If you are not used to loud noises, it may be a disadvantage because this device works loudly. Many users claim that it is not a silent killer but rather a very loud zapper. You can clearly hear the shocks, so if you need some silence, this product may not be able to give you that.

The power cord is very short, about 15 inches, so you will almost certainly need an extension lead to get it set up where you want.

Also, despite it being an insect killer, there are still reports that it cannot kill biting mosquitoes, and thus it has defeated its purpose of saving people from the itchy bites of female mosquitoes. Bug zappers will kill some mosquitoes. However, mosquitoes are attracted by carbon dioxide, and some species are not attracted by the UV light that lures many other insects. To control mosquitoes in your house, a lamp that produces CO2 may be more effective.

Others also complained they received a defective version that would not turn on. It ended up being quite dangerous since there were instances of people getting an extremely painful electrical shock.

This was after they plugged it in, and no lights lit up. So when they unplugged it to remove the safety screen to get to the bulbs, that is when they got electrocuted. Indeed, you need to be careful with this one and follow the instructions for changing the bulbs. After the bug killer is turned off and unplugged, you have to discharge the high voltage grid by touching it with an insulated screwdriver for at least 30 seconds.

Most buyers find it good, and a few do not. But that does not make the Aspectek Electronic Indoor Killer any less than a recommendable product. Yes, some users were not satisfied because it could not kill insects for them, or it only worked for a few months.

However, the majority of customers claim that this zapper is one of the best devices to help them get rid of insect pests. The percentage of positive reviews (four or five stars) on Amazon is 87% out of nearly 12000 reviews, which is pretty convincing!

The buyers of this zapper feel a sense of triumph whenever they hear the loud zap, which lets them know that this product has killed an insect that could have potentially gotten near them and could have disturbed them. It is also a wonderful sight for them to see the tray of this device filled with dead insects the next day.

And yes, all you need to do with dead insects in the tray is remove and clean it. It is that simple. No other maintenance is required. Plus, you do not need to use sprays or pesticides, especially if they are not allowed in a specific area in your house. Truly a great buy!